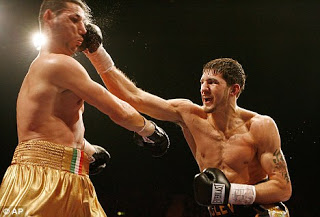 Nathan Cleverly looked like the best light-heavyweight on the planet as he destroyed Antonio Brancalion in five one-sided rounds at the Wembley Arena last night.

The Italian, a former European light-heavyweight champion himself and a seasoned European campaigner, looked lively throughout the contest and showed fast hands, but was caught time and again by Cleverly´s powerful right hand. A looping right floored Brancalion in the fourth, but the Italian boxed well to survive the round. A left hook in the fifth staggered Branaclion, and was soon trapped against the ropes taking heavy rights to the head, leaving referee Jean-Louis Legland no option but to stop the contest at 1:15 of the round, giving Cleverly the European title to add to his British and Commonwealth belts.
It was Cleverly´s sixth straight stoppage win, after scoring just three knockouts in his first 13 fights.
Brancalion (32-8-2, 8 ko´s) had only been stopped once before in a thirteen year career, and that was when he was caught cold by German puncher Juergen Braehmer in the first round in a European title fight last year.
At 6´4´´ tall with a huge frame that may take him all the way to heavyweight in the future, 22 year old Cleverly (19-0, 9ko´s) is the most imposing fighter in the light-heavyweight division. The improvement in his punching power over the last twelve months had been dramatic, as he has added leverage, timing and accuracy to his shots.

The outstanding light-heavyweights are Bernard Hopkins and Chad Dawson. Based on last nights performance, the force of nature that is Nathan Cleverly could well beat either man.